Today was the nicest days we have had. Cloudless and so warm we were constantly sticky, and now we are both very red. I did put on sunscreen but I guess I should have done it more often than I did. It is not too bad, but it is definitely red.

My day started 6:30 am to get ready to go on two adventures. First, get myself to the dive center with the local buses. I am always nervous about doing that, but it worked out fine and I got there on time. The dive center had two companies working there and I went with Aquadomia and the two main people could speak English really well. It felt so nice to speak English here. I was a bit sceptic about this before. How could it only cost 89 euros and include everything? All the rented equipment, including a dive computer, and a boat dive as well. I am surprised and happy! It was a pretty short dive though, but it was still so worth it. The dive site was called Les Moyades and was in the national park (since two years) Calanques. We pretty much just dove around a rock and I really enjoyed the dive. It was only 31 minutes, and I kinda wished we could have been under longer. But we saw some pretty cool stuff like moray, starfishes, sea urchins, a scorpionfish, and lots of schools of Saloma. We saw some other specific fish too, but I am too lazy to get out of the couch and get my dive log, haha!

The surface temperature was apparently cold today, only 17C, and the bottom temperature 15C. I didn’t think it was cold at all, I was actually really warm when we were done. When I was on the boat, waiting to fall backward into the water I was burning up, sitting there in a 6.5mm wetsuit in that hot sun. I was scared of getting a heat stroke. So the “cold” water was welcome. The maximum depth today was 18 meters, that’s the deepest I’ve ever been before. Because of the great visibility, 20m+ it didn’t feel too scary.

We took a very fast boat out there and it was just so nice with the wind. But I was a bit afraid of falling over board, haha! We were back at the dive center around noon, I cleaned my equipment, filled out my log book and thanked the two guys (one was Vincent, but the other had such a French name I honestly don’t know what it was) and went back. It went smooth going back and I even got a couple of French tourist girls asking me for a specific beach. What’s crazy is that I actually knew where it was and told them how to get there and that they had to change bus on the way, haha! 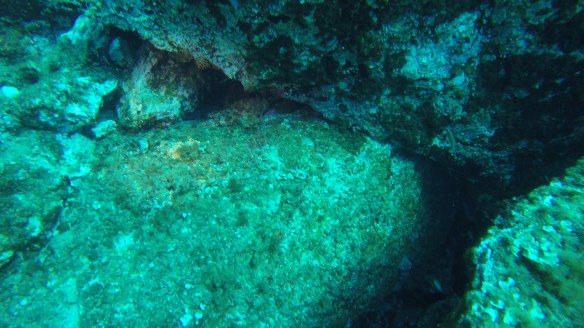 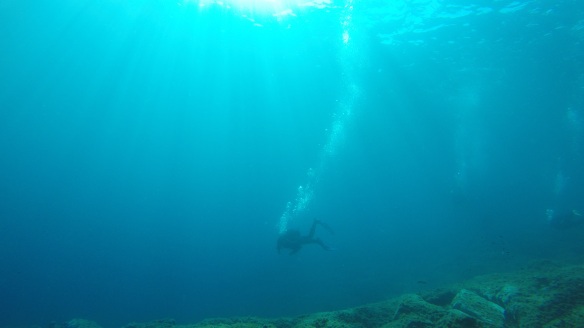 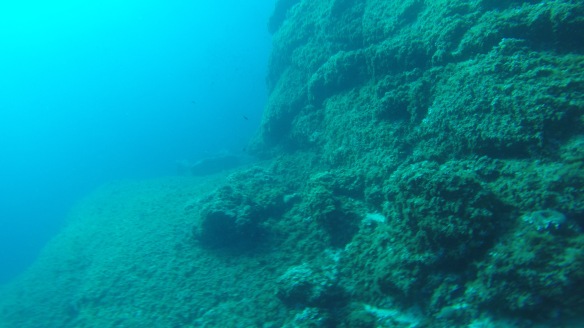 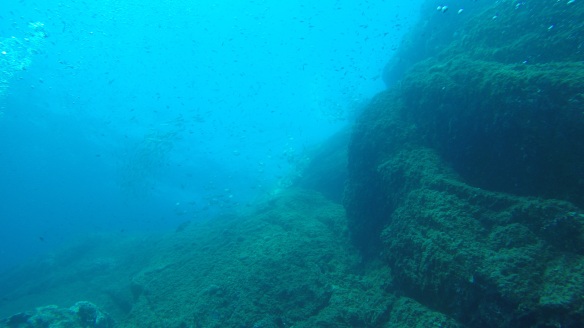 Moray in the crevice. 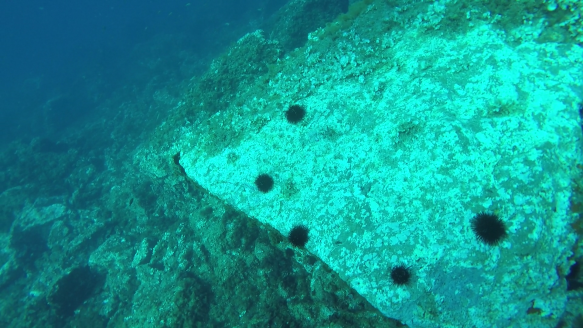 The rock we dove around. 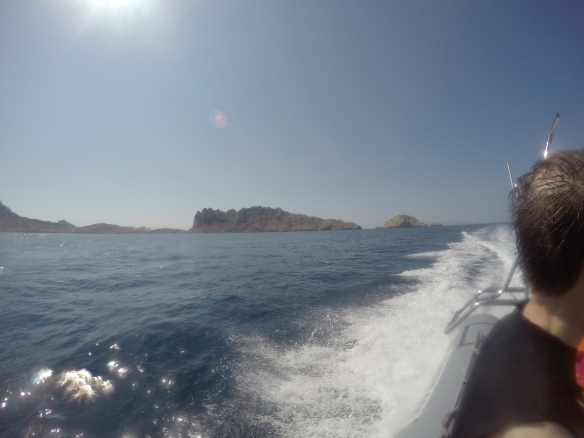 Turtle island to the right.

I met up with Axel in the park behind the building we live in. Sat there for a while and just chilled. Then we went up to the apartment and got ready for the excursion to Calanques National Parc. We went on a tourist boat and it was okay. The tour guide only spoke French which was not very fun, and there were too many people on the boat. But the scenery was pretty amazing! But the only thing I could think about was how badly I wanted to jump in the water. It was so blue and it was so hot under the gazing sun. I got burned, but this might have been my last chance of getting any sun, so why not. It is not too bad, but my shorts gave me a pretty bad new tanline… 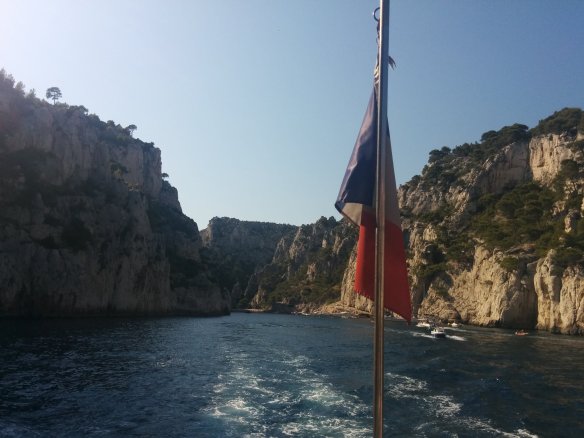 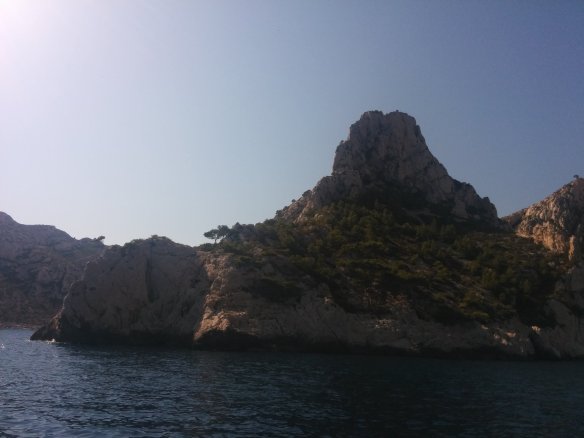 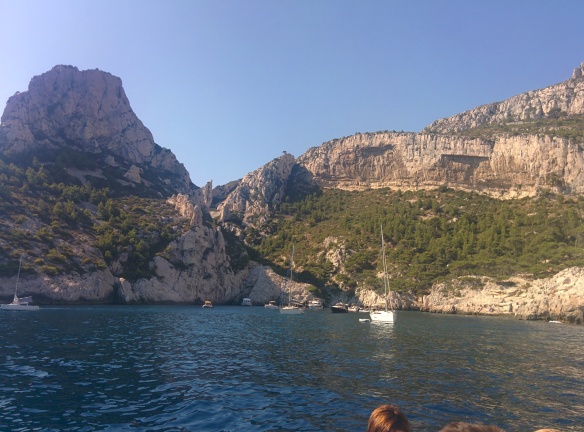 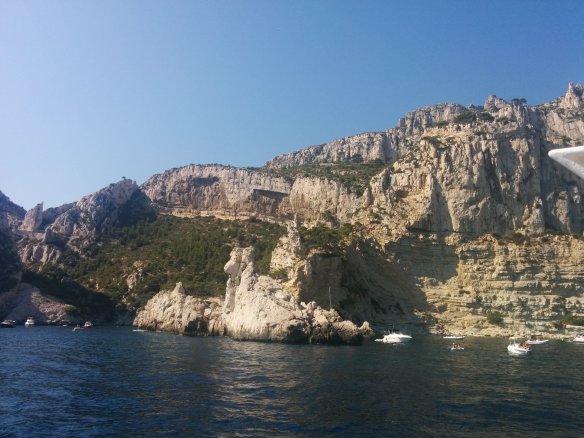 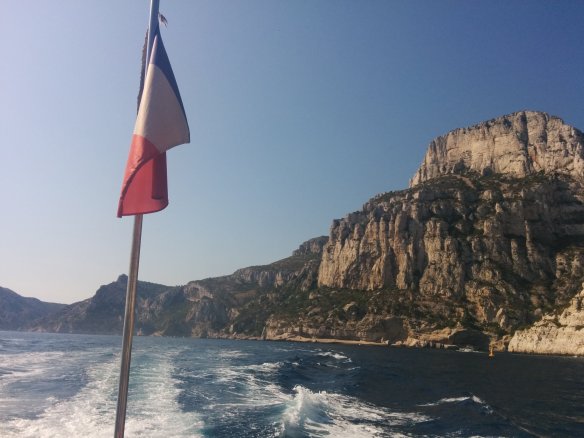 The whole boat tour was 3.5 hours and we were back in the harbor at 7pm. Went straight to dinner and I had the best pasta carbonara I have ever had. Then we went to the same park by the building and watched the sunset. It was a very beautiful sunset. 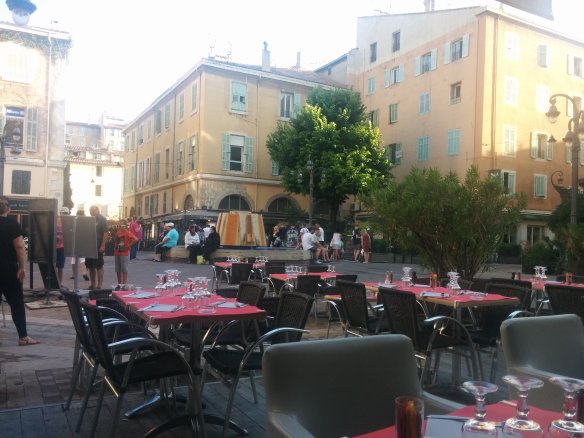 The square where we had dinner today.

Then back up and I looked through the videos from the dive. They weren’t as good as I hoped. The blue color is not even close to what it was in real life. And the pictures are kinda blurry. Well well, it’s at least something.